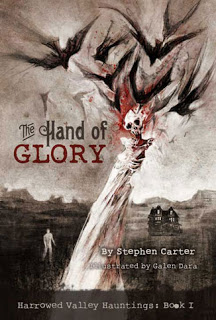 First, although I know this book is aimed at a young audience (say, 12 to 14?), the cover image by Galen Dara makes this hard to believe. It’s a more explicitly terrifying cover than anything I can remember seeing on any other book aimed at the audience—or for many adult audiences, either. Dara’s work manages to show horror while implying an even deeper terror. Which is not easy. Usually, revealing horror dissipates terror, especially in visual art. And outside of Richard Upton Pickman, Dara may be the best I know.

Her work also appears inside the novel—most of which images are substantially more subtle than this one. And while they illustrate moments, rather than the novel as a whole, from a purely marketing standpoint, I have to wonder if they mightn’t be more appropriate for the cover. I have a hard time imagining an elementary-school librarian ordering this for their shelves.

Though I certainly hope they do.

When William and I were editing Monsters & Mormons, three top submissions could not be accepted on the grounds they were clearly novel excerpts rather than standalone works. One of these was  a version of The Hand of Glory‘s opening.

In the final novel version, that opening is split up between multiple opening chapters. While, I understand the decision from a pacing perspective, from an aesthetic perspective, I don’t like having the foundational family-history myth our fourteen-year-old protagonist must come to grips with chopped up and distributed.

And while I’m tempted to dismiss this complaint because it’s all first-few-chapters stuff, set-up is immensely important to a horror novel. And, I think, the pacing consideration is more important to the target audience than the aesthetic one.

Carter namechecks The Shining in his author’s bio which is suiting as I had been thinking of that novel as a point of comparison. For most of the first portion of the novel, I can’t tell if we’re dealing with the supernatural or insanity. But not in the subtle tradition of The Haunting of Hill House or The Turn of the Screw—we’re talking Shining-level “subtleties” here.

The Hand of Glory is the kid version of a full-throttle horror novel in the King tradition. It’s never as awful as all that of course (audience!) but it doesn’t pull punches either. There’s no Scooby-Doo ending, and it feels too real and plausible to simply be forgotten when the book is closed ala Goosebumps.

Here’s the set-up: Paul’s family has moved from Seattle to a rural Wyoming valley and his father’s ancestral home, where a husband and wife under Brigham Young’s command founded the community. Husband picked up a second wife who disappeared one day in a puddle of blood and mystery.

Paul, being the fourteen-year-old protagonist of a kid-friendly horror novel, naturally stirs up the ghosts of this complicated family—the same time his own family seems headed toward disintegration. His only friend an old distant cousin with a junk shop.

At this point, I think you get the milieu well enough. The only real questions have to do with execution and effect. The execution: good. And maybe the best way to judge the latter is to consider how I feel about this text from the front cover—“Harrowed Valley Haunting: Book I”—

Do I want to see more?

Those last few paragraphs, in fact, have me a bit anxious for Book II.

Since this is A Motley Vision, I should take a moment to talk about the Mormon elements of Hand of Glory. And I have to admit that if your primary interest in this novel is its place in Mormon letters, you should know that it’s Molit in mostly tangential ways. Yes, the ancestors are Mormon polygamists. We know Paul goes to church, but we never see him there, and it doesn’t affect his thinking about the supernatural in any obvious way. Scripture (Bible only) does make some appearances and in ways important to the story, but the primary source of knowledge of the beyond comes from a  librarian/witch who can find keys with a Magic 8-Ball. She’s a terrific character but, you know, from an AMV perspective what’s most interesting about her is the void she’s filling.

I’m not prepared to conclude anything, but here are some reasonable proposals:

1. The book is aimed at a national audience. Ergo, scary stuff is a tough enough sell. No room to get too Mormon here.

2. The book makes symbolic argument of the futility of formal religious practice in a world of chaos and pain.

3. These ghosts are so over-the-top grotesque that, out of respect for the faith, it was excused from a direct role in this fantasy world.

4. The primary religious arguments about the text are about love and family—not messy doctrinal things like where we go when we go.