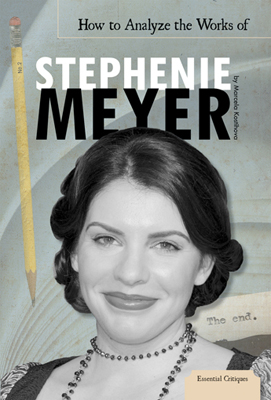 Ran into this book in the New! section of my local library a couple weeks ago and decided to bring it home for a looksee. It’s part of ABDO Publishing’s “” series which include books on how to write about everyone from Stephen King to Paul McCartney to Sylvia Plath to George Lucas to C.S. Lewis to Toni Morrison to Quentin Tarantino to Virginia Woolf to Andy Warhol to Georgia O’Keeffe—it’s an eclectic group of subjects, to be sure.

Author Marcela Kostihova is an associate professor at Hamline (you don’t suppose she knows Angela?) where she is primarily a bardologist. She does, however, teach a course on Stephenie Meyer in modern American culture.

The book has ten chapters. The first is an introduction to criticism, the second a brief bio of Meyer. The remaining chapters alternate between a plot summary of one of the four primary Twilight novels and application of critical theory to that novel. Twilight gets structuralism, New Moon psychoanalytic criticism, Eclipse queer theory, and Breaking Dawn gender criticism.

As a high-school teacher, I would be delighted to receive any of Kostihova’s sample essays (the bulk of the analysis chapters, after a brief introduction to the technique) from a student.* I thought the analysis of Eclipse‘ a bit weak, but the other three  would have left me weeping with joy. They are topnotch examples of the sort of analysis kids should leave high school able to execute.

In short, the book is a terrific and simple introduction to four critical theories through popular literature. If I had several books from this series, I would be able to introduce more than four theories. I could assign different books to different kids, then have them present their volume’s theories to the class. In short, I can see many ways to use these books in a classroom.  But don’t think they’ll do the work on their own. That chapter one was a pretty anemic introduction to critical theory. Just add teacher, I suppose. Then you really have something.

Taking off my high-school specs for a moment and looking at the book through my MoLitCrit goggles, as an intro to Meyerian studies, the book is still mostly a success. The sample essays are good because they engage with the novels as legitimate pieces of literature. They aren’t dismissive; they are serious and smart. And this is good.

But now let’s look back at the biographical chapter two.

The Mormon thing is hit pretty hard in the bio, to the point where the lack of a chapter feels like an unfired first-act gun. And what do you think of this sentence?

[Following her marriage,] Stephenie relinquished her public duties—except her ongoing service to her church—to be a homemaker.

I find this sentence astonishingly awful. What, Mormon moms can’t vote? Raising kids is antithetical to public duty? I’m perplexed by the sentiment. My wife, when I read it to her, was as offended as I’ve ever seen her.

The rest of Kostihova’s attempts to engage Meyer’s Mormonism mostly consist of dropping the M-word word a few times. She needs to mention it but has nothing to say so she just keeps mentioning it. Kind of . . . lacking, as biography.

The happy news is that though the biography tries and fails to show much respect for its subject, that lousiness is not predictive of how the novels will be treated.

I wish Kostihova knew a bit more about Mormons. I think she would dig out some insights from Meyer’s works with the critical application of Mormon ideas. But I respect that she recognized she doesn’t know the subject and thus just left it alone in her literary analysis.

If Meyer studies actually catch on though, Mormon literary theory will need to broaden its reach.

All the same. Speaking as a high-school teacher, I liked this book. Well done, Professor Kostihova.